Strengthened by three complementary personalities, the Marcille Collection cannot be dissociated from the members of the Marcille family who each contributed to it, in order to forge its identity.
François Marcille would progressively develop a great admiration for this painter, whose paintings he would first copy before acquiring them, which would constitute the first artworks of a rapidly expanding collection. Indeed, little by little, this love of painting would become his main activity as he browsed through flea markets and sales, in which he did not focus on the most famous names but rather upon the artists reflecting his own sensibilities. Accompanied by Louis La Caze, also a zealous amateur who would notably discover Gilles de Watteau, he discovered La fuite à dessein (“The escape with intent”) by Fragonard. Without ever encountering true competition, the two friends each built up a singular collection composed of artists who would later on be recognised as major.

The rythm of acquisitions accelerated, until it reached the impressive number of forty paintings by Boucher, thirty by Chardin, twenty-five by Fragonard, eighteen by La Tour, fifteen by Porreneau, and in total more than 4 500 paintings of all origins and time periods. 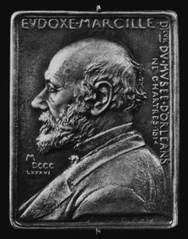 Oscar Roty, médaille gravée du buste d'Eudoxe Marcille, exemplaire de la collection du MET.
Every Monday, he would receive amateurs, like the frères Goncourt or the young Edgar Degas, as well as the families of the doctor Louis La Caze.

In 1870, he became director of the Musée d’Orléans where he gave a new dynamic to the existing collections, notably through a reworking of the scenography until then limited to presentations in rooms not adapted to the works on display, and by publishing catalogues referencing 1232 works, including 1088 from donations, strengthening the museum collection. His efforts attracted the recognition of his peers. In 1871, he was named President of the Society of the friends of the arts of Orléans, while acting as head of the School of drawing of the city, where the teaching provided was free. He then became a patron of the arts by entrusting his personal fortune within the service of emerging artists, like the sculptor Alfred Desiré Lanson (who made his portrait in 1880, today in the collection of the Musée d'Orléans) and Charles Desvergnes, both former students of the school which he directed. He was granted the rank of knight of the national order of the Légion d’honneur the 19th of April 1879.

Seal of the Camille Marcille Collection.